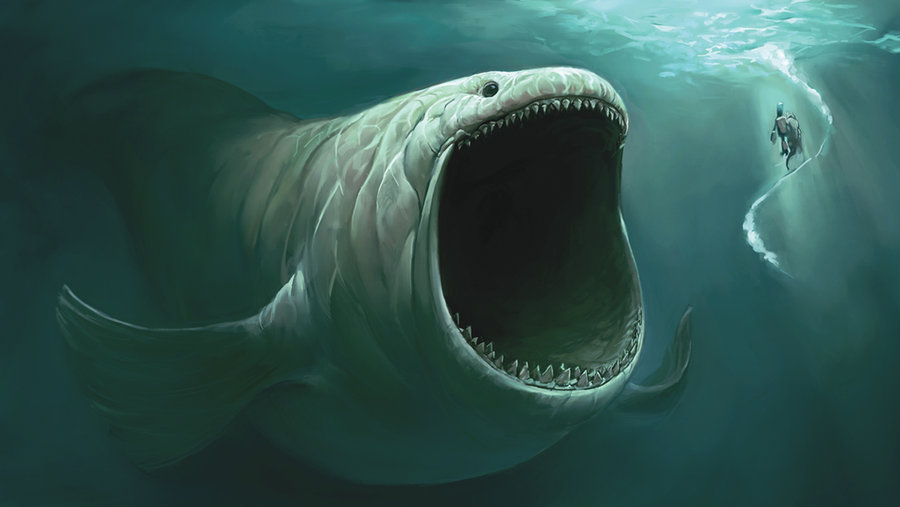 4 incredible sea monsters you’d rather not meet while in the water!

Legends and myths of sea monsters have fascinated and engrossed us since the first dawn. Fierce, gigantic creatures living in the most uncharted element on earth – the great oceans – how could anyone fail to be enthralled by its mystery?

Superstoked has gathered intel on three of the most amazing sea monsters to have ever existed. You’ll be astonished at what we found out.

However, it is considered to have become extinct some 1.5 million years ago – so, you needn’t worry too much about this colossal beast. Unless, one of them got trapped in the polar ice during the Ice Age – but that surely couldn’t have happened could it? Some think otherwise, and such speculation has given rise to a series of “Mega Shark VS …” movies – which we might add are absolutely hilarious. Our favorite is the latest release in the series of movies: ‘Mega Shark VS Mecha Shark’ released in 2014 – but we’re quite fond of ‘Mega Shark VS Giant Octopus’ as well.

The Megalodon is considered to have been a humongous version of the Great White we know today. There were some major differences, one of which including that the Megalodon was cosmopolitan – no, we’re not talking Sex in the City all of a sudden, we are still talking razor teethed mega shark – meaning that it was present in all the world’s oceans. Much like the Killer Whale is cosmopolitan today.

Another major difference was teeth size – the Megalodon strutted an amazing dentition set that would leave the Great White gaping in awe. Fronting 5 rows of teeth, with a total of 276, that could be up to 18 centimeters long (7.1 inches). Here’s a comparison of Megalodon versus Great White teeth size:

A 20 meter Megalodon is estimated to have weighed in at incredible 103 metric tons (103000 kilo!) – in light of this, a ‘Mega Shark VS surfer’ is not something to long for, is it? Or do you think you would be safe in one of these state of the art shark-deterrent wetsuits?

How does this shark deterrent rash vest work, you say?

Well, it is all about the colors and patterns – sharks are very intelligent creatures, and normally don’t attack humans. Unless, they have some sort of mental disorder or mistake you for an injured sea-lion. This is where the hippie-like pattern comes into effect. The sharks recognize poisonous fish, and avoid eating them – hence the rash vest mimics the colour and pattern of the highly venomous Lion Fish, which shark’s despise. Simplez.

To see how it works, we recommend watching season 8, episode 3 of “How Do They Do It?”, which deals with how shark deterrent works:

Fables of tentacles crushing mighty ships to driftwood, and dragging their wailing crew into the dark abyss have been told for hundreds of years amongst fishermen and sailors alike. Yet, no definite proof of such giant octopuses have been presented. There are two octopus-like sea monsters that surface frequently in tell-tales: The Lusca and the Kraken.

First of all, let us venture to azure blue Caribbean waters. For this is the home of the first of the two fabled giant octopuses – the Lusca.

Most of the stories featuring fishermen and sailors that allegedly have been attacked, have taken place in the vicinity of a specific tropical island: Bahamas. What? The Bahamas? Why would that be a refuge for stories involving the Lusca? There’s one answer to that: Guardian Blue Hole.

The Guardian Blue Hole is a spectacular natural phenomenon consisting of a deep, round hole that has been measured to be as deep as 436 feet (132 meters) – within the hole we find a complex cave system that still hasn’t been fully mapped. Brian Kakuk, a world leader in cave diving and technical diving, alongside Brad Pecel, a member of the US Cave Diving team and part of the book Blind Descent: The Quest to Discover the Deepest Cave on Earth

(by James Tabor), took it upon themselves to explore and map out the vast Guardian Blue hole underwater cave complex (see illustration of the mapped cave layout below).

There are a number of these mystical blue holes around the world. The deepest of them, Dean’s Blue Hole, is located outside Clarence Town, Bahamas – and measures a staggering 663ft (203 meters) deep.   Naturally, stories and folklore would have it that these blue holes are inhabited by undiscovered oceanic creatures – the sheer structural complexity and depth of the sea caves being the antagonists of such beliefs.   Is it possible that undocumented species dwell within these caves? Most definitely. Is it possible that one of these might be the gigantic octopus the tales describe? Possible, but not very likely – still, these blue holes remain largely unchartered, and who knows, a subspecies of the Lusca, or the beast itself, might reside within.

Unlike its fellow giant octopus, the Lusca, the Kraken seemed to be more adept in colder water, frequently appearing in Norse folklore, along the coast of Norway. In its description, the Kraken remarkably resembles the Lusca – with giant tentacles, big enough to crush ships, and a ferocious gaping beak-like mouth filled with razor-sharp teeth.

Vikings feared the Kraken, and certain literature would have it that many of the ships that failed to return from plundering had fallen victim to its wrath.   A Kraken appears in the movie, Clash of the Titans, this version of the sea monster had its origin in Greek mythology – born of the titans Oceanus and Ceto, both entities of the sea. Again, its immense strength and size were reported to be of extraordinary proportions. Its tentacles large enough to destroy ships and even wreak havoc upon coastal cities – like seen in the aforementioned movie.

Clash of the Titans – The Kraken movie:

Unfortunately, there hasn’t been reported any valid means of deterring the Kraken – but if you are to come across one, give this shark deterrent

a go. If that doesn’t do the trick, we recommend having an electromagnetic Freedom7 Shark Shield at hand – ideal for the surfer, scuba diver, swimmer or snorkelers that swim in shark infested waters.

about SHARK DETERRENTS such as the electromagnetic shark shield.

In 2010, scientists unveiled the findings of the fossilised remains of a ancient, gigantic whale with fearsome, long teeth. They had found the Leviathan.

From the remains, they estimated that the sea monster had been around 17 meters long and an aggressive predator – even picking fights with other humongous predators of its time, such as the Megalodon shark. They named it Leviathan Melvillei – the latter part of its name inherited by the author of Moby Dick, Herman Melville. You see, the scientists who discovered the Leviathan where all die-hard Moby Dick fans.

There you go, 4 amazing sea monsters that once roamed and ruled the oceans. What are your thoughts? Do you think any of these sea creatures could still exist? Discuss in our FORUM or on our FACEBOOK page.