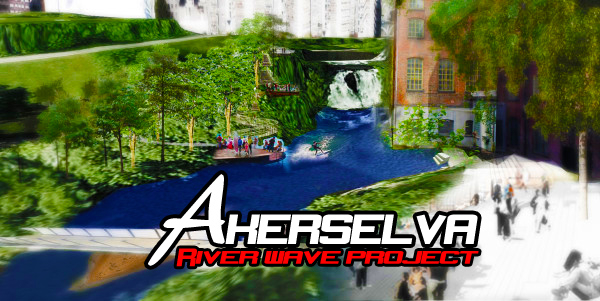 Meet Terje Skulstad, one of the Norwegian catalysts behind the beautiful suggestion of constructing an artificial river wave in the city river of Oslo: Akerselva.

Urban surfers based in Oslo (like Seamus Fox, surfshop.no, Sebastian Kjellström, Lapoint.no and Christian Nerdrum, friflyt.no) would have a whale of a time if this were to be transformed from blueprint to wet dream reality.

The idea in itself is far from ludicrous – as discussed in our previous article on the topic, it would in fact provide Oslo with another gem that tourists would flock to. A real life example of which can be seen in Munich, Germany, with the Eisbach river wave. This wave has attracted an extensive amount of media attention and generated ten thousands of euros to local tourism.

No, not really. You see, it is all about exploiting the naturally occurring river currents and adjusting the river beds. The complete oceanographic explanation would have to fall upon the experts, such as NTNU’s Lars Erik Klemetsen who has specialized in flow dynamics – but it could not put too much pressure on Oslo’s budget seeing this project through.

Then again if rural Hamar can  spend 23 million Norwegian kroner (approx £2.3 million) on a faulty diving tower, Oslo should be able to spend a million or two making the river wave come true. The Akerselva River Wave project has a much more realistic chance of creating tourism income, and would help clean up Akerselva – putting it back on the map as something else than a junkie hangout.

We met with Terje Skulstad and had a chat with him about the river wave project:

Hi Terje, the Akerselva River Wave project is a fantastic suggestion. How did the idea first come about?

TS: I guess the idea was the result of several experiences with a sudden eureka as i walked along the riverbed a stormy evening during the spring flood of 2002. Since than the idea has gradually taken shape. I´ve talked to engineers, surfers, architect, politicians and so forth. Slowly the idea´s been honed into a winning recipe. Hopefully!

We know you’ve participated in some meetings with local politicians regarding the river wave. Are you able to tell us anything about how  the meetings went? Are there some Norwegian political parties that are more open to the idea than others?

TS: Politicians are a strange lot. They always seem to be positive to initiatives for the common good. I guess their job is to smile and nod. But somewhere along the way between the meeting and the time of decision making they change their mind. Last, with the city council, the argument for their decline was safety and obstruction around breeding areas for trout and salmon. Soooo…i have taken a few steps. Firstly I´ve been in dialog with OFA (oslomarkas fiskeadministrasjon) to hear their reasons against a surf-wave. I still need to arrange a meeting, but i think we can come up with a solution. Secondly i plan to arrange a pilot. If we can show the politicians it´s safe, the magnitude of interested surfers and the areas of use for the wave they gotta concur! AND in regards to safety regulations: as long as you don´t make the area MORE dangerous than it already is it should not be a problem.

Are there any meetings in the near future, where we might get an idea if this project could see the light of day – or not?

TS: I haven´t got any meetings with decision makers on the agenda just, but i have a meeting with the project group from NTNU who just finished their project. They have created a model we can work with in our job towards a perfect river wave.

Do you have any new pictures, graphs or similar that we can share with our readers?

TS: The NTNU crew have made a small model of their river wave. Looks more like a real life ocean wave than the manmade river waves we have seen previously. Check it out here:

Is there anything Superstoked readers and surf interested Norwegians can do to help the Akerselve river wave project along? Have you considered starting a petition? (The pressure applied in the Saltstein/Mølen debate seemed to do the trick)

TS: Help is always welcome. The next thing on the agenda is to write an application to “Innovasjon Norge”. Generating funding is always a big issue when starting up. If anyone has good contacts or write killer applications they are welcome to speak up. On the other hand, applications takes a lot of time and effort. If someone have a good idea for a way to generate funds please let me know.

As I’m trying to get a pilot started I would welcome inputs on fitting locations. Criterias: accessible with a crane, enough water, a rapid stream, positive politicians/tourist admin/etc. Akerselva might not have enough water at all times…

Anything else you would like to mention – that we’ve forgotten to ask about perhaps?

TS: Everyone who’s not already a supporter at “ja til surfebølge i akerselva” should list up! The more the merrier…

We hope to see as many of you engaged in the Akerselva River Wave Project as possible – if you have any suggestions or comments, please let us know in the FORUM. Thanks!

– PS: Check out the previous article we wrote on the Akerselva River Wave: Oslo River Wave – The infamous Akerselva’s Redemption.

Please share this article to help increase the awareness and support regarding this project. Join the facebook group, engage on the fourm and share by using this smart URL: http://smarturl.it/akerselva_riverwave or via the original adress.