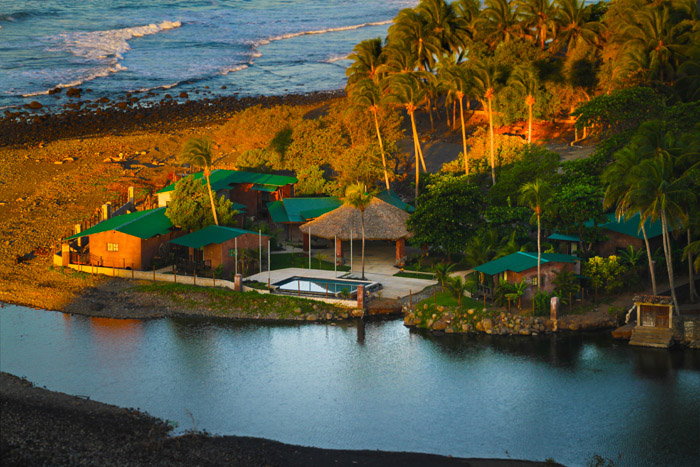 El Salvador, even though it is by far the smallest country based on land mass in Central America, can boast about having some of the best and most consistent surfing waves in the world. Fed by the same south swell that feeds all of Central America, Mexico and the North American coast line, El Salvador’s beaches lie the right direction to capitalize on that continuous south swell coming off of Australia.

Situated between Guatemala on it’s northen border and Honduras/Nicaragua on it’s southern border, El Salvador is often overlooked as a surfer’s destination….their mistake.

While so many know of Costa Rica’s famous surf, so few realize that the waves in El Salvador rival or excel those of Costa Rica. We have several right point breaks and even more beach breaks, some soft and slidey like California breaks, others strong and fast like Hawaii, and many that barrel like Nicaragua, all of them within a 3 hour drive of each other. Punta Roca is called the J Bay of Central America, due to it’s long, long breaking right from the point to the pier. Mizata, on the other hand, has a fast, strong right point break toward the cliff, which intimidates many but thrills so many others.

El Salvador has suffered from bad publicity, thanks in part to the US State Department’s incorrect label of a “dangerous place to travel”. Of course El Salvador has crime, as does every city/country in the world. Is it excessive crime and liable to affect your surf trip? Absolutely not. The fact is El Salvador is a nation of hard working friendly people, who welcome tourists with smiles and handshakes. Involved in a civil war with Nicaragua in the 80’s, known as the Contra /Sandinista war, which was made famous in the US due to the clandestine activities of Oliver North and the CIA, that war has been over for more than 20 years. Today, El Salvador, has a democratic government that holds elections every 6 years, not allowing the same president to run again, unlike Venezuela and Chavez.

The following is a description of the majority of El Salvador’s breaks.

The coastline of El Salvador is divided into two parts:

Right point and 3 beach breaks. Wave magnet. Needs small-medium size swell. The Point breaks best on the up swell, the beach breaks are better on the high tide. Home of Mizata Point Resort.

Looong cobblestone point. Breaks on any swell from 2-20 ft. Good beginner and long board wave. Best at low tide.

Psuedo left/right reef/point. Any swell and any tide and light wind. Somewhat closed out and kinda heavy. Only legitimate left in the country. Beware of localism.

Epic right point. Long fast rides with plenty of tubes. Best wave in the country and it’s right in the center of town. Needs light winds and at least decent amount of swell. Handles massive swell. Best at higher tides.

Epic right point. Take boat to get there. Long and fast with heavy barrel sections. Needs lots of swell and good winds.

Mizata Point Resort was built with the mature surfer in mind. So many of our older surfers took “surf safaris” to Mexico and occasionally Central America in Volkswagen Vans ,Woodies and other vintage cars the 60’s and 70’s, before it was the norm to fly in to surf locations throughout the world. Those surfers always carried a dream with them to one day live in a tropical paradise with warm water and surf year around. When the owner of Mizata Point Resort, an ex-pat, saw the location and swell at Mizata, he realized a vision that could give those Boomer surfers a location where they could re live that almost forgotten dream of living in a tropical paradise and surf the uncrowded waves that they so well recall in the days of their youth. Built with individual cabanas, all with an unobstructed view of the consistent break from their private decks, it is the exception, not the norm of surf accommodations here in El Salvador. Now, the most difficult obstacle in the way of a Boomer surfer is going on a surf trip, is going alone. Most are married, many with children. Mizata Point Resort thought about this when the resort was built and took into account their ladies. All the rooms have air conditioning, Hot water, Sat Tv , King or Queen size beds, all with nice linens. Even if they don’t surf the ladies, or men, can sit in the infinity edge pool and watch their soul mates surf The Point. The owner also wanted to bring a different menu to El Salvador, so nationals and foreigners alike could try foods not from El Salvador itself. Beer Can Chicken, Mom’s Meatloaf, Baja Fish Tacos, just to name a few, along with Salvadorian favorites, such as Fried Whole fish, grilled Snook, or Wahoo and Tuna, when available. Great shrimp plates and oh yes, the best Cheeseburger in the country.

The motto here at Mizata Point Resort is “ Where peace and tranquility meet great surf”. The owner and staff work very hard to live up to that motto and treat every guest like part of the family. The resort has held the #1 hotel in la Libertad on Trip Advisor for more than a year. You can contact them at mizatapointresort.com and see for yourself what Mizata Point Resort and El Salvador have to offer the surfing, or non-surfing traveler. While it is situated and caters to the traveling surfer, Mizata Point Resort can be enjoyed by all. El Salvador is like Southern California in the sense that one can be at the beach and an hour and a half later be high in the mountains, visiting coffee plantations or riding a zip line, exploring the quaint artistic towns that dot the landscape or swim under a cascading waterfall, in the shadow of a volcano.

Hopefully this article gave you an insight to Central Americas most misunderstood and undiscovered country, El Salvador, and if you are aware of it, quelled some fears that are unfairly bestowed on it by people who sit in tiny cubicles and pass judgment using yesterday’s news.