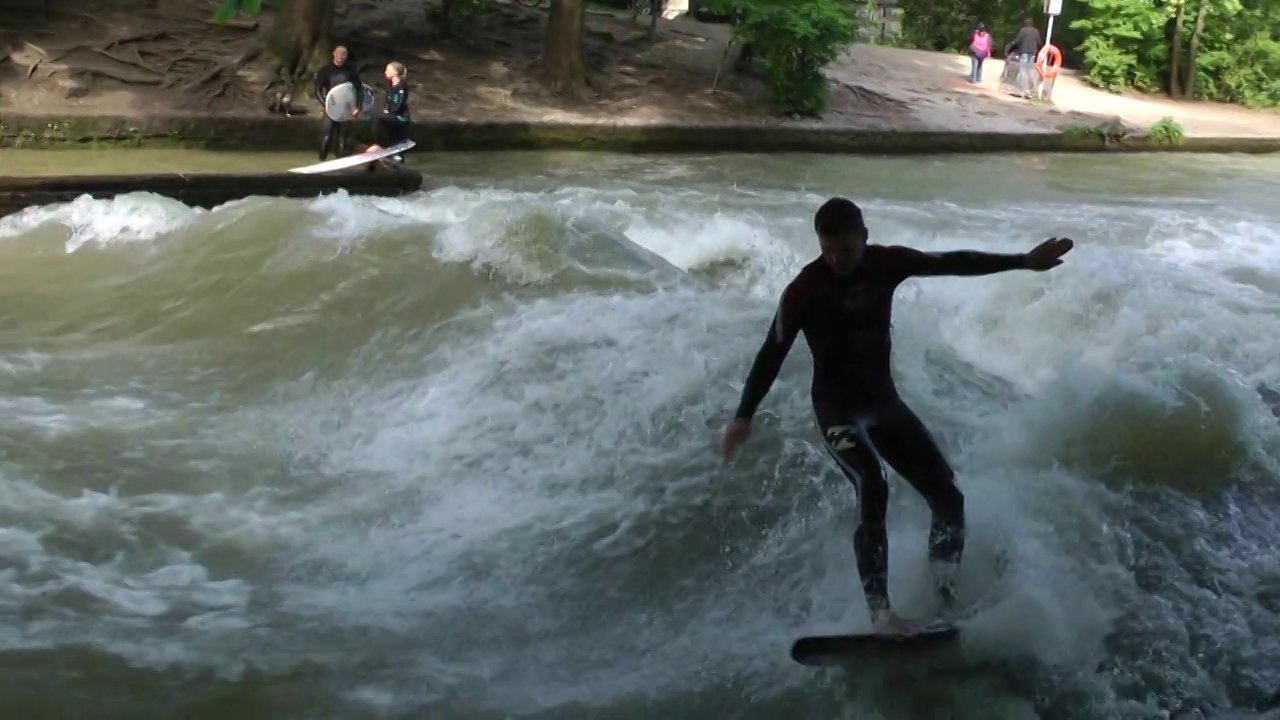 The filmaker Finian Pye Vogel has created a short film documenting the rapidly increasing scene of the Eisbach River in the City of Munich (Muenchen) in Bavaria. Enjoy!

The film features some great surfing from the Eisbach locals, who sure know how to tackle the river wave. (This movie will autoplay)

How did you get the idea for making this surf movie?

FPV: My mother is from Munich, I am fluent in German and go to the city two or three times a year, and see the city as my second home. The Eisbach is near the famous Haus of Kunst (House of Art) and the first time I saw was about 8 years ago. I was amazed, I didn’t know river surfing existed in Munich, which is far away from the nearest beach!

I was with my photo-keen Mum at the time and that was the time she took the photos you see in the film. Since then whenever I have been about I have spent a fair amount of time sitting by the side and watching the surfers. Its incredible what they do on that Wave, as the surfers have adapted to their environment. What struck me is how small a space they have to use whereas the sea gives you an enormity of space to manoeuvre. I had wanted to make a wee film on the Eisbach for at least a year before I actually filmed it.I knew what kind of shots I wanted and what questions I wanted to ask the surfers but didn’t plan it beyond that. I just rocked up with the ideas in my head, hoping that there would be some people surfing there. I told people I was making a short film, though a fair few didn’t want to be interviewed or didn’t feel it was appropriate as they were not actually from Munich.
Had there not been any surfers I would have come back the next day, but as it was late August I was sure that there would be. I didn’t know any surfers there so couldn’t pre arrange anything which was unlike every other film I have made! It was actually quite refreshing taking this approach as it was a step into the unknown, though could have been a failure!

Did you try surfing the Eisbach yourself – if so, how would you describe it?

FPV: Shamefully I have never surfed it myself, there are a few waves in Munich and the Eisbach is the most advanced. I would love to give one of the easier ones a ride but till then I shall stick to my cold Cornish Atlantic swells.From what people have told me it is alot very intense as you need to be moving too and fro and a wrong fall could leave you seriously injured, whereas a bad bail in the sea in England mostly just involves drinking a bit of salt water and having sand in every crevasse!

Could you please give us a little description of what it was like to see Eisbach up close and personal? What was the social vibe like?

FPV: This short non profit film documents the rising scene of the river surfing in my mother town of Munich, a slightly alternate version to the standard sport of surfing everyone is familiar with.

Munich has a few river waves in it and has been cited as the capital of the river surfing world. In summer man made The fast flowing Eisbach (Ice Brook) wave is the most advanced wave in the city and and has seen numerous injuries and further non surfing related fatalities from people entering the 2km long river in the nearby Englischer Garten park.

There is a strong subculture based around the Eisbach, but it is a far cry from the promenades full of shops oozing surf fashion and culture in your typical surf hotspots. Granted there are shops but in this city there is a fraction of what you will find in a village in say Cornwall, UK. Faces become familiar to each other and many of those I spoke to had, after time on the Munich waves had eventually ventured to the far off waves of the Atlantic to see what sea surfing was like.

German surf tourism is stronger then ever at the moment and when I am down in Cornwall with my cornish girlfriend Sarah we see many surf tourists that have come from all over Germany and Austria.

Surfing on the Eisbach was deemed illegal by the authorities until they finally keeled to the unrelenting pressure that the open movement persisted with. Now it is endorsed by the city of Munich and has been surfed by the likes of world class surfers Rob Machado and Garrett McNamara. The Eisbach is visited by a plethora of Surf tourists in the summer and Munich opens itself in friendliness to all tourists with a hearty Bavarian warmth.

A problem that the increase of numbers poses due to the inevitable exposure of this unique surf spot is that only one person can surf at one time. The more that flock there, the longer the queues will be. However those who have glanced a keen eye at the wave need to remember it is not for groms!

Thank you Finian, we hope to hear (see) more from you in the near future!

– Did you know they are planning to build a river wave in Oslo, Norway?