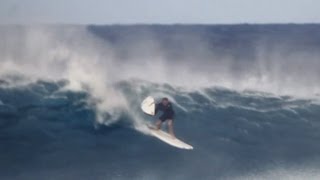 How to surf two surfboards on one wave – with Jamie O’Brien.

JOB 2.0: Switching board mid-wave (video). Ps – The magic happens at 1:25 in to the video, this is a must-see video, so be sure to share it with your friends and loved ones.

“Jamie O’Brien tries a new technique by paddling out on his longboard and then dropping in his short board to ride the wave.

Later, despite despite the warnings of his feline friend he goes all the way to the finals of the Volcom Pipe Pro for an epic showdown down to the last second with John John.”