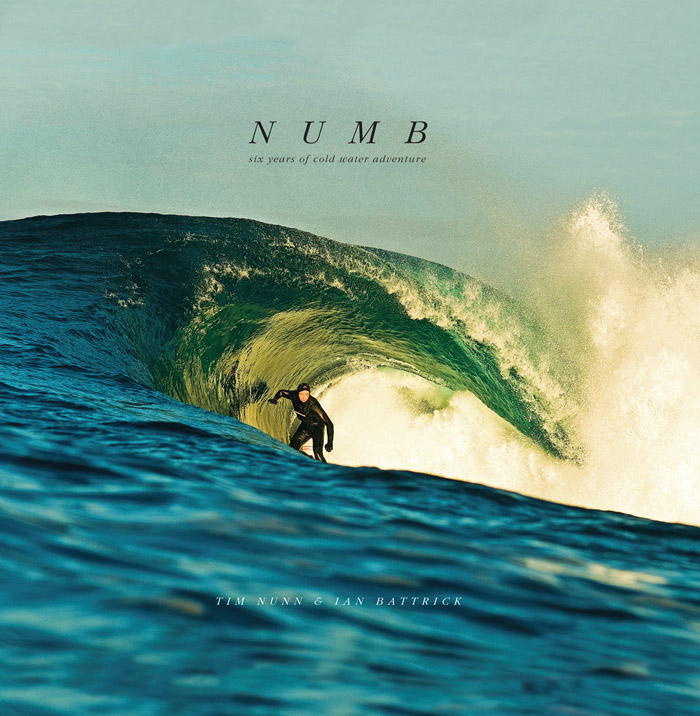 Comfortably NUMB: Six years of travel, searching, cold water surfing & adventure in one photographic travelogue. Surfer Ian Battrick and photographer Tim Nunn have spent months in some of the wilder places in the Northern Hemisphere and this is their story of times where their paths crossed in 200 pages of rich photography.

From dealing with bears in the wilderness of Canada to volcanic eruptions in Iceland, driving for days in Norway to surfing heavy slabs in Scotland, this book is a window into some of the less explored corners of the surfing world. It is a book designed to inspire you to break free of the confines of everyday life and have your own adventure. To get out and see the planet for the incredible place its is, whether that be for a weekend, a year or a lifetime.

How did NUMB come into existence? Who had the original idea?

TN: When I was photo editor at Wavelength magazine in the UK I had always wanted to do a photo book, so it was always bubbling along. But it just grew naturally as Ian and myself travelled. In the end Numb became a reality somewhere between Oslo and the west coast, it was on that drive that the commitment was made to turn our journeys into a book.

Tell us a little bit more about Tim Nunn and Ian Battrick.

TN: Ian is from the Channel Island of Jersey, he’s spent his entire life surfing, travelling and experiencing the world. He’s one of the most interesting characters to travel with, he’ll surf anything from 1 foot slop to as big as it gets and always with a smile on his face so he makes the perfect travel companion, especially in the colder reaches of the planet where the surf is less than consistent. I have been a photographer for the last ten years, mostly around surfing and adventure, I was the editor of British surf mag Wavelength, and am now a freelance photographer and writer.

You mentioned bears in the wilderness of Canada – care to go in to a little more detail there? Sounds pretty scary!

TN: We were dropped off in the wilderness on the west coast of Canada for weeks at a time, just camping out with friends Timmy Turner and The Bruhwiler brothers. Out there you are totally cut off from the rest of the world, absolutely no way of getting in contact. Once in there is no way out again until your pre-arranged pick up date when the boat comes back in, that is if it can get back in, the slightest swell makes it too hazardous. Once in you’re on your own, so within a few days it’s inevitable that the local bear population comes along the beach and introduces its self. The first time you see them you suddenly realise how big and powerful these creatures are, and although encounters become a daily occurrence you never fully get used to them. Some would keep their distance, some would come right into camp, sometimes you just couldn’t get out of the surf because they are all over the reef, then there’s Cougars and Wolves as well, but that’s another story.

If you had to choose a favorite spot featured in Numb – where would it be?

TN: So hard, the reefs of northern Scotland are incredible, and we have so many good friends up there, Iceland as an entire country is just out of control, The Norwegian coastline has to be the most beautiful and intriguing coast on the planet, but I think if I had to pin it down it would be the right-hander in Canada, just the whole wilderness experience makes it incredible.

Being a Norwegian-based magazine, we have to ask what you thought of our surf? Did you meet any friendly Orcas?

TN: Norwegian surf when its on is as good as anywhere, it’s a little fickle, and the coastline makes it a mission to get around, but that’s all part of the fun. I keep looking at the coast and thinking how much there must be out there, and how much better norway would be if you could just mover the British Isles! But loved the surf, the people and the country as a whole, but no Orca encounters (thankfully).

Best of luck with your book. It looks great! Please let our readers know where they can follow further developments. Mahalo!

and on twitter @thegoosechase – you can get hold of a copy of the book here – www.lunasurf.co.uk

Be sure to pick up your copy of …