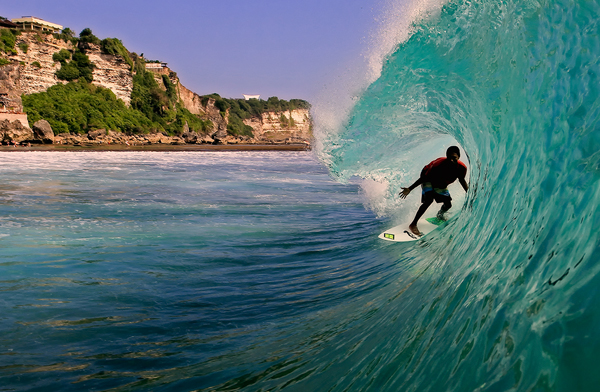 Driving to Wales takes forever, and even if you were to start your journey before you were born, still wrapped in cosy amniotic fluid, you will still only get there by about 2pm the following day. Even if you live in Wales, driving to Wales takes forever. That is one of the things that make Wales special – but then again, they do have smokin’ girls and fantastic surf. Ahh, to be surfing Wales… I had dreamt of this moment.

Alex was so nice as to donate his car (a Bugatti Veyron… which makes the previous paragraph even more ridiculous…!) for the trip, as we were not only taking 2 surfboards and a lot of supplies, but also our girlfriends (sounds like I am talking about a harem or something here… and I will let you believe that is what I meant). The trip was actually planned by my girlfriend, who doesn’t even surf. She had found some sweet little trailer in Wales that could hold 6 people and which was also located next to the famous Hells Mouth beach. So it wasn’t strictly a surf trip from the start. It was a “2 couples and 2 additional friends holiday trip” that happened to be close to a sweet welsh beach break. We started our journey in Bournemouth at 3am in the morning. I insisted on driving that early because I was going to do a considerable part of it and it was the royal wedding weekend. In my head I could already see us standing in traffic on the M25 if we would drive at a normal time, cursing in a way that would even offend the South Park creators; Matt Stone and Tray Parker. Soooo… I made my friends wake up to an unholy early hour, stuffed them all in a car and we were off, destination Lynn peninsula, North Wales. Ahh.. soon we would be surfing in Wales.

First we had to drive via Guildford to pick up my dear Becca, who was awfully delighted to be so privileged to experience this most beautiful hour of the day… she definitely would have preferred some more sleep! With her on board we started the second part of the ride. Here I should mention that I looove motorways. I am from Germany. The country that probably invented motorways, or at least perfected them, ‘cause you can drive so fast that your face peels off… literally. Even though that is not the case in England, you got some sweet roads here that at least allow you to go 80 miles per hour for a good while without interruptions. And then, …you hit Wales! Oh jeez the roads are long, winding and slow. Now I know where Oasis got their inspiration from for that famous quote… The road behind us was twice the distance of the one ahead of us, but the next bit would still take a painful 4 hours to drive (exactly the time of which we had already driven… it was like driving around in Narnia or something). I know I am comparing “no speed limits” with welsh roads, but in Germany 8 hours of driving would mean you would end up in the middle of Italy, not just having barely passed a 1/3 of the country. That is something I will never get used to here.

In defence of Wales though, I have to say that it is absolutely stunning. It looks like Hobbiton of middle earth, made out of peaceful valleys, rolling hills, stunning green mountains, beautiful sandy bays and amazing views. When we finally arrived at our booked accommodation, we found out that it was the most ridiculous looking little trailer trash thing, straight from the 80s era. I wanted to put on my fake moustache (which I always bring with me just in case an opportunity like this was to unveil) and film an episode of “My name is Earl”. We unpacked all our gear and cracked open a can of sunshine on the front lawn. The weather turned out to be just glorious for the whole trip. Probably 25 degrees and pure sunshine for 4 days. People would always ask us later: “Are you sure you went to Wales?” Apparently our experience of the weather is somewhat untypical for the area. We didn’t know this at the time, but when you are drinking rainbows out of cans, basking in sunlight and at the same time riding around on small pink unicorns; other things tend to be put aside quite efficiently. We spent the first day on the beach, sunbathing, skim boarding, playing cricket and getting an traditional English sand-peeling from the strong winds that occasionally danced across the beach without forewarning. In the evening we fired up the BBQ and had rainbow-alcoholic beverages until comfortable numbness set in and the jokes lost a lot of class, but the laughing lasted proportionally longer and longer.

One of the days, on the way back from the beach we nearly drove into some tiny baby sheep, which had managed to escape from under the nearby fence that bordered the road. Alex stopped immediately and I jumped out to collect them and put them back over the fence. The word “put” is maybe a bit misleading. When I picked the first one up, I tried to lift it over the fence, keeping my arms clear of the barbed wire and also avoiding contact with the horned mother sheep that was waiting on the other side of the fence and looked a ‘little’ unhappy about the situation. So I basically let go a little early and it turned more into “throwing” baby sheep. The little fellows got back to their feet though and recovered, looking a little confused to what had happened. It was only afterwards I realized I was smeared with sticky goo, and saw that the lambs still had parts of the umbilical cords attached. That’s how young they were!

Apart from being proper welsh (interacting with sheep in an inappropriate way… just kidding), we also discovered a stunning rock formation on the top of a hill just between Hells mouth and the next big bay. I cannot remember the names of all these places because they all sounded like things located in the Lord of The Rings saga; Mordor or Lothlorien, or similar (LOTR fans will know what I mean). I think the little collection of houses close to it was called “Rhiw”. It was an easy little climb and absolutely worth the effort. At the top we were rewarded with a view that I just cannot describe, but have a look at the pictures which speak for themselves. You could see for probably 60 to 70 miles north and south. All of the stunning bays and mountains dwelling in the late afternoon sunshine. We took quite a few landscapie and self-absorbed pictures and hung out there taking in the beauty and majestic atmosphere before starting our decent.

We repeated those kind of days for the whole weekend and lived happily ever after. Oh, wait… I forgot… the surf. Well… there was none! It was just nail-bitingly unfair. A trip to the welsh coast. 8 hours drive each way. Hells Mouth at our feet. Wonderful weather, but the sea was flat like a pancake. I even had bought some new fins to allow for some more tail release of my 6’4’’ performance fish. Alex and me kept jumping into the car, analysing the map, trying to figure out what the wind- and swell direction could throw up. Checking magicseaweed, driving from one bay to the next. Crossing the peninsula back and forth. Checking magicseaweed again. Getting frustrated. Trying the next bay, getting excited over a ripple in the distance. Getting disappointed again. Dying a little bit on the inside, back into the car. Next bay… only yet again to be filled to the brink with disappointment. It was just tragic, but at some point or another we had to admit it: It was and was going to stay flat. On the Sunday evening before the hill climbing action, we just decided to get the wetsuits and boards wet, and walked into the smallest swell ever. Both Alex and me surfed some tiny waves lying on our boards and even got to our feet once or twice just to sink straight back in.

It was the least epic surf trip ever and the most epic short holiday we could have had in Wales. THE END…

3 tips for an epic trip to Wales: